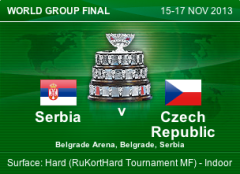 World No.2 Novak Djokovic will lead Serbia in it’s second-ever Davis Cup Final this week, fresh off his Barclays ATP World Tour Final success against Rafael Nadal in London. Nole will spearhead the home team against the defending champion Czech Republic who boast the likes of Tomas Berdych, Lukas Rosol and Radek Stepanek, the Czech’s have also named the experienced journeyman Jan Hajek as their fourth player for the deciding tie in Belgrade.

Djokovic will be backed up by his regular Serbian compatriot Janko Tipsarevic along with doubles specialist Nenad Zimonjic and the 238th ranked Ilija Bozoljac, the final will be played on an indoor hard court at the Belgrade Arena and will commence this Friday 15 November 2013. 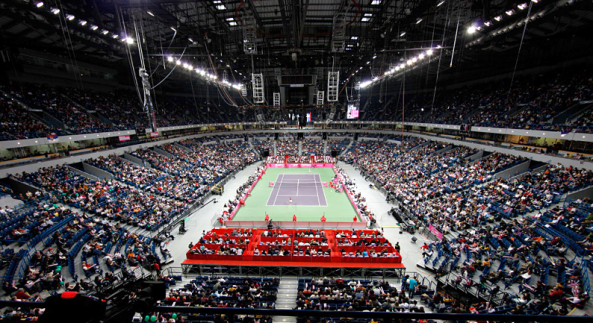 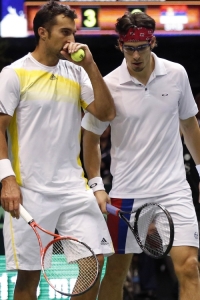 With Djokovic in red hot form, the Serbian fans will be expecting two singles wins from the Djoker this weekend and it would surprise many if he fails to deliver, especially on home soil. With an expected two wins from Nole, the question is whether or not Serbia can grab another win to seal their second Davis Cup triumph in as many attempts. Tipsarevic has been disappointing this season on the ATP World Tour but with thousands of Serbian fans cheering him on, Janko is more than capable of stealing a singles victory for his native country.

The Serb doubles combination is expected to be Zimonjic and Bozoljac, and if the tie is all square heading into Saturday’s doubles then the dub’s could become a crucial match, particularly if the Czech’s play Berdych and Stepanek. The home fans will be hoping to win it 3-0 or at worst, to be leading 2-1 heading into Sunday’s reverse singles, which would then have them in the box seat with a super confident Novak set to get the party started.

If Serbia trail 2-1 after Saturday’s doubles then things could get really interesting for the host nation, however I’m picking that Belgrade will be celebrating Davis Cup victory No.2 come Sunday evening in Belgrade. 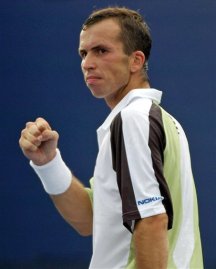 Stepanek on a Mission

Berdych will be the key figure for the Czech’s if they are to go on and defend their title in enemy territory this weekend. Tomas will enjoy playing on the indoor hard court in Belgrade and he has the game to cause trouble for Djokovic if he plays his best tennis. The Berd man does not have a good head to head record against Nole though so a win against the world No.2 on his home court would be a surprise, Berdych doesn’t fare too well in the head to head match-up with Tipsarevic either (3-5), but the Czech is certainly capable of beating Janko in a best of five set battle indoors.

The sleeping giant for the Czech’s could again be Stepanek, Radek plays great doubles but it’s his dogged determination in the singles which could be most useful to the defending champs, it will be interesting to see if the Czech’s play Rosol on day one instead of Stepanek though. I’m picking they might throw Rosol in the mix to play Djokovic on day one and rest Stepanek for Saturday’s doubles and a possible reverse singles against Tipsarevic on the Sunday. I think it is possible for the Czech Republic to defend their crown in Belgrade this weekend but the fact they are playing in front of a partisan Serbian crowd and an in-form Djokovic means their task will be extremely difficult.

Did You Know? Defending champions Czech Republic have made it to the competition’s showpiece for the third time in five years