To my mind Gaudio is an easy player to admire. His style of play with that sweetly timed backhand is one of the great shots. Very few players can generate that kind of power and offensive weight from the backhand side off a single hander. Especially on clay where the ball kicks higher from an opponents extreme western grip forehand as is most of the time.

The Man with the Golden Backhand

The other thing was that in an Argentine generation of colorful characters, he was the cleanest cut if you excuse his hair. He never has been snagged by any doping offenses (Chela, Coria, Canas, Puerta) or got into bust ups with other players (Nalbandian, Coria) and is well liked in the locker room. As an indication of his priorities, he took up tennis as a way to make money for his parents who had a rough time during the deep recession that Argentina experienced in the early 90s. 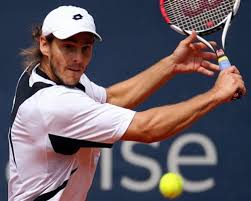 When Gaudio reached the French Open final, although he was unseeded and technically ‘an unknown’ it was no real surprise to me. At Barcelona that year, he had taken out Moya and Kuerten only to lose a tight 5 setter to Robredo, no slouch on clay. At the French, after two 5-set wins against Canas and Novak, he breezed through Enqvist, Andreev, Hewitt and Nalbandian. He of course beat Coria or equally was handed the title when Coria capitulated, but what happened next was he made the next 3 finals in as many tournaments, losing them all to Canas (Stuttgart), Zabaleta (Bastad) and Massu (Kitzbuhel). From there he lost his nerve. A French Open champion he was, but he maybe did not feel like one.

The Weight of Expectation 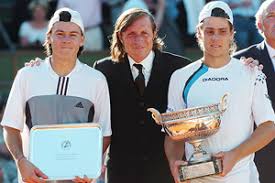 In 2005 he bounced back, with a career-high five ATP clay court titles and 55 match wins (55-21) and 42 match wins on clay (42-8), second only to Nadal (50-2) with only one 1st round loss in 12 clay events. He was back, but then again as the year rolled around, 2006 and 2007 his ranking slipped and slipped. Maybe the motivation was gone. Most players is offered his numbers at the start of their careers would have taken it.

At that point Gaudio should have done a Borg and walked away content, but there was still something to prove. Everyone would have thought that he was lucky, that the French crown was gifted to him, but I disagree. Coria should have taken his chance and he didn’t. Gaudio beat the best to get to #5 in the world in 2005 and in the grand scheme of things deserved his success. Unfortunately, Gaudio revealed that he had received psychiatric treatment for clinical depression during his time away from tennis.

[If you’re interested, Gaudio’s head-to-head, on clay, with Nadal is 3-3. Not if any players can claim to not have a losing record against Rafa on the dirt.]

“Every time you play him fast,inside the court, he has a lot of trouble to bring back the ball. But, when he’s in a rhythm, he gets confident and starts playing pretty good. Also, I’m a leftie and he doesn’t like that very much. Nobody really likes to play him because he’s really solid from the baseline and he’s really fast. I like to play him, because I get into the court and start to hit the balls. He doesn’t cause me a lot of trouble.” Ever-modest Marcelo Rios on beating Gaston Gaudio.

Watch: The best of Gaudio