We’re back to Germany and a new tournament on the calendar to look forward to!

The tour sees a bigger event this week with the 500 level German Tennis Championships. A good turn-out highlighted by former 4-time champion Roger Federer. Half the Spanish Armada are here with in-form Verdasco, Almagro, Lopez and Robredo, not to mention another 7!

Defending Champion: Juan ‘Pico’ Monaco – Has a 14-6 record in Hamburg and beat Tommy Haas in the final last year. Will be feeling confident to repeat.

Nasty Floater: Albert Ramos – The lefty Spaniard took out Tommy Robredo last week and is part of the new breed of spanish dirt-ballers.

Up and Coming: Jerzy Janowicz – Since his Wimbledon run, the Poleverizer moves back to clay to see if he can keep the momentum up.

Slumping: Roger Federer – Not usually found in this category, the Swiss Army Knife needs to win this event to regain some traction.

On Fire: Fernando ‘Hot Sauce’ Verdasco – The man from Madrid is finally catching fire again after his excellent performance at Wimbledon and run in Bastad.

My pick: Roger Federer – A tough call but Roger must be up for this one to regain some credibility. Remember, he’s a 4 time winner here with a 29-4 record.

Did You Know? The Rothenbaum Tennis Center, which features a retractable roof stadium seating 13,200 spectators – making it the largest centre court in Germany.

The ATP World Tour returns to Bogotá, Colombia, in 2013, following the ATP Board of Directors’ approval of the sale of the Los Angeles tournament.

Shame for the US but great for Colombia, who boast 2 very good native players in Santiago Giraldo and Alejandro Falla. Both of them play here and will be pumped but Falla needs to relax if he is to break a four-tournament losing streak in front of his fellow Colombians. 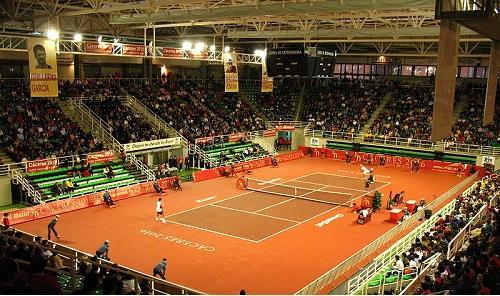 Veteran Watch: Xavier Malisse – The X-Man does his best on hard courts, so this is an opportunity to pick up some points this week.

Up and Coming: Vasek Pospisil – The young Canadian had a good week last week and has a big game.

Slumping: Janko Tipsarevic – Looks for his 5th tour title but has shown little evidence so far this year of picking one up.

On Fire: Igor Sijsling – The tall Dutchman did well on grass but can he keep it up here?

My pick: Kevin Anderson – The Saffer loves the hard courts and the draw can’t scare him too much.

Did You Know? The Claro Open Colombia will be staged at the Centro de Alto Rendimiento in Bogotá, the same venue that hosted an ATP World Tour event from 1997–2002.

Thanks for reading and check back next week for more picks!