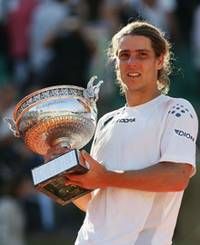 After an up and down career, Gaudio finally calls it quits with much to be proud of. Gaston possessed on of the sweetest backhands in tennis and maximized his talent and deceptively small stature on clay, on which all of his 8 titles were won.

The 2004 French Open of course cements him in the record books with one of the most unlikely wins of all time against his most bitter rival Guillermo Coria. This was all in the pre-Nadal era and these 2 lit up the clay court season in the early 2000s.

It was actually in 2005 that he followed up his French success with 5 titles but after that the wheels came off and he battled his own mind and was diagnosed with clinical depression after wallowing in the Challengers for too long.

In his own words: “What’s wrong with this kid, is he crazy? “It’s not like he lost to a nobody. I had been playing on clay and won Roland Garros, but Rafa felt like a failure.” (after beating Nadal in Buenos Aires)