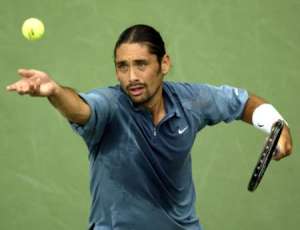 To kick off my Tennis enigmas series, I have chosen perhaps the biggest one of all – Marcelo Rios. His on and off court attitude never made him popular with other players and the press but his style of play and shot-making was out of this world.

His finest season was in 1998, capturing three consecutive Masters Series titles (Indian Wells, Key Biscayne and Rome) along with four other titles and he became No. 1 — at the age of 22.

His career was short-lived through injury but he has made a comeback of sorts on the champions tour, which he dominated for a season. Some of the other players are quoted as saying that he would still beat many of the top 30 ATP players today. In 2008, Ríos defeated Pete Sampras in an exhibition match that commemorated the ten years anniversary of having reached the Number 1 ranking in the world.

Hear What Others Say About Him: (source: Mark Scoop Malinowski www.Tennis-prose.com)

Thomas Johansson: “He could make you feel like it was the first time you were standing on a tennis court, you know [smiling]? So I hated to play him. You could get killed by him easily, 1 and 1 or something like that, and you could have played a good match.”

Fabrice Santoro: “I played Marcelo three times. You could say, on the court, he was a great, great player. And one of the greats of the game. He was to serve well and he hit the ball really, really well on both sides. He hit the backhand moving well too. I remember when he won Indian Wells and Key Biscayne in a row, he was playing one of the best tennis I’ve ever seen…We played three times, he beat me twice. It was always a good match. Because I like to use the spins and slice on the court and when I was playing against him, it was a very fun match, but it was a very good competition. His talents — one of the best. A lefty Agassi. (What was he missing?) Sometimes a little bit short physically. Because other guys can serve really well. He can play well forehands, backhands, moves pretty well. But five sets for two weeks — too tough for him.”

Wayne Ferreira: “He was really good because he took the ball early and he had a lot of feel on the ball. He moved pretty well and he was a good competitor. But he was so good at finding where the ball was going and taking it so early…I didn’t really have a problem with him. I actually did pretty well against him. I beat him most of the times that I played against him. I just felt like I could overpower him a lot. He got a lot of balls back and he took it early but, to me, he was a little bit soft at times. He didn’t hit the ball that hard. I felt like he hit the ball, I could still run down everything. I could overpower him. But he was difficult. He could get a lot of balls back, make you play a lot of balls. I had to be in great shape and I had to be really competitive and concentrate a lot to beat him. (Why did he not win a Slam?) Maybe for that reason. I think he was just a little bit soft. Guys like Pete and Andre — on a regular basis — when it got tight, tough like this, they used to overpower him.”

Roger Federer: (When asked back in 2000 which was his favorite tennis player to watch): “I like Rios. I like his game. When he’s playing well, he’s fun to watch. Because he’s a different type of guy.”

Petr Korda: “I beat him badly (in 1998 Australian Open final 6-2, 6-2, 6-2). It was very — actually I had the chance to see the match on video for the first time a month and a half ago. And in TV it looked completely different than it did on the court. But I remember I was really dominating and I was ready for that. I knew this was probably my last chance to win a Slam — and if I played the right game, then I could beat him. I think I really shot him down that day. I know we were hitting the balls very hard. On the TV it doesn’t look like it. I was hitting balls very hard. (What kind of person was Rios?) I think that not many people knew him. Some people had problems with him, he was like a controversial, not many people did like him. But I know him, we play doubles. I don’t know if it was before or after we played in Australian Open. He was a nice guy. Gifted player. And I said in Australia, he can be maybe number one. But it’s most important to win the Slam. Unfortunately for him, he never achieved it. Maybe I was that reason, probably.”

A Ball Kid: “I was a ballkid for Marcelo Rios at the RCA Championships in Indianapolis. I could understand a lot of Spanish and the things he said were not appropriate to say to a minor. Every year I would get as many players as possible to autograph my event T-shirt. I don’t have a Rios autograph because I didn’t want it.” (source: http://www.tennis-prose.com)

Vince Spadea: “It seemed to me that Rios tanked his matches more blatantly than others”

What are they doing now?: Dabbling in seniors tour and family life. Also runs a construction company with his Dad.
Career Titles/Finals: 18/13
Win/Loss Record: 391/192
Career High Ranking: 1 (1998)
Finest moment: Winning 3 Masters series titles in a row including the Indian Wells/Miami double, reaching world #1. Selected by a panel of Chilean’s Government Ministry for Sport, Olympic committee and selected panel of sports journalists as the country’s “Best Athlete of the 20th Century”
Famous For: Being the only male player in the open era to have held the World No. 1 ranking despite never winning a Grand Slam singles tournament.